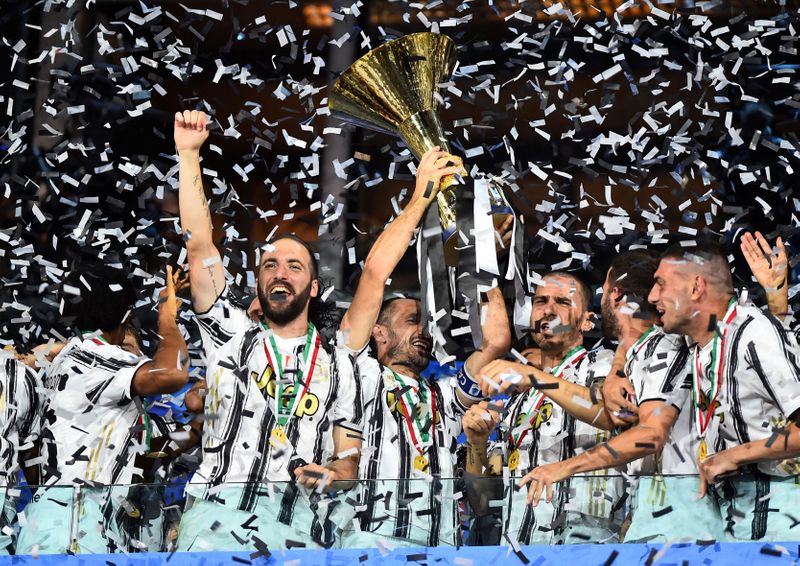 MILAN/LONDON (Reuters) – Three private equity groups have submitted final bids to Italy’s top-flight soccer league and are awaiting a decision over a deal that could shake up the country’s soccer industry, sources familiar with the matter told Reuters.

The Serie A clubs are due to meet on Wednesday to review offers for a stake in a newly-created holding vehicle that will control the league’s broadcasting rights business for the next 10 seasons, the sources said.

“This is a historic decision for Italian football,” one of the sources said.

“It will take more time and more discussions to select a final buyer but we’re moving in the right direction.”

CVC is facing competition from a consortium led by Bain Capital, the sources said, adding that the two proposals differ in structure but not in value.

U.S. investment firm Fortress has teamed up with Apax and Three Hills Capital Partners to make an alternative proposal consisting of equity and debt, with little governance control, one of the sources said.

Fortress, which initially offered debt financing to Serie A, has revisited its offer in recent weeks to include an equity package, mostly provided by Apax, this source said.

Representatives at Serie A, CVC, Advent, Apax and Three Hills declined to comment while Bain and Fortress were not immediately available.

But Lazio’s president Claudio Lotito and Napoli’s president Aurelio De Laurentiis are among those who have so far been reluctant to give up control, they added.

Wednesday’s meeting is likely to bring clarity on whether the bulk of Serie A executives want to launch a media business and tap into private equity coffers to boost flagging revenues and weather the novel coronavirus crisis, the sources said.

But no bidder is expected to enter exclusive talks as the clubs might want more time for an in-depth review of the three offers, they added.

For any deal to go through, 14 out of 20 clubs must vote in favour of the stake sale.

Scientists are demanding to know why AstraZeneca’s paused trial of its Covid-19 vaccine is still on hold in the US while it has been...
Read more
Business

Our mission to help you navigate the new normal is fueled by subscribers. To enjoy unlimited access to our journalism, subscribe today.Researchers in England say...
Read more
Business

‘It influences practically no one,’ Trump states, reducing the influence of the coronavirus on younger people today as U.S. dying toll hits 200,000.

Enjoying down the dangers the coronavirus poses to youthful individuals, President Trump falsely instructed supporters in Ohio on Monday evening that the virus...
Read more
MY BIP

Scientists are demanding to know why AstraZeneca’s paused trial of its Covid-19 vaccine is still on hold in the US while it has been...
Read more