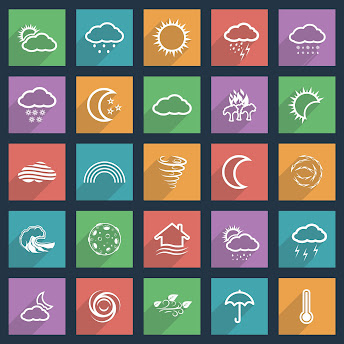 Consider this: The Amount of Money Spent on the Unsuccessful Attempts to Defeat Lindsey Graham and Mitch McConnell Was $200 Million. Yet, the Forecasts of the Election’s Outcome Generated By Those Campaigns, and By Independent Pollsters and the News Media, Were Almost All Laughably Wrong!! 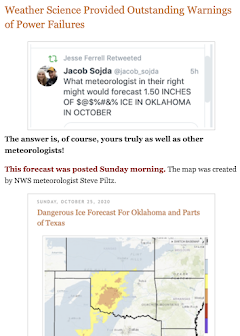 October 27: A record ice storm, the ferocity that has never occurred this early in a season, strikes parts of Oklahoma and Texas. In spite of its unprecedented nature, a full two days in advance — which was plenty of time to prepare — we warned not only of the ice but of the major power outages.
It has been eight days since the power failed in the colored counties (below) which represents approximately 300,000 people still without power. Compare their location to the forecast map of power failures (above). Absolutely remarkable accuracy. 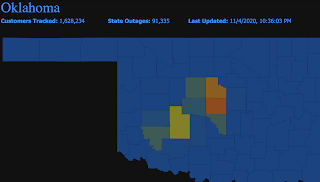 The same remarkable forecasts were made with Hurricane Zeta: With some areas in the sixth day without power, compare the maps of the forecast power failures (upper map) to the actual power failures (lower map). 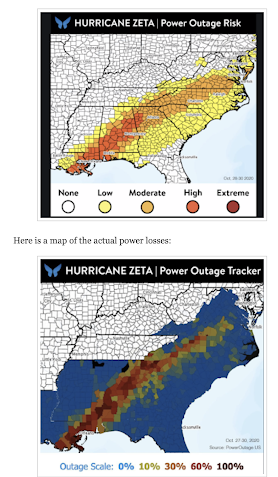 The budget of the National Weather Service (capitalizing its investment in weather satellites) is a mere $2 billion per year. In spite of the tremendous value the NWS the creates the agency is nickeled and dimed to death. President Trump has even proposed drastic cuts to its budget!

While literally hundreds of millions are wasted in politics, the NWS doesn’t have enough money to fully deploy its data collection jet when hurricanes threaten! 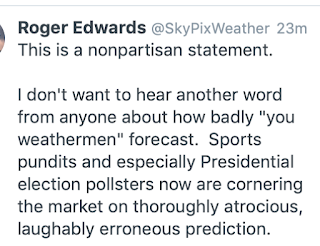 Roger is 100% correct. My first book was the story of the tremendous societal value of weather science in terms of thousands of lives saved each year, tens of billions of averted property losses and incalculable billions of increased business efficiency. 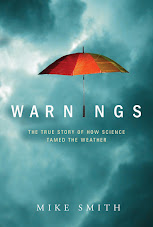 The reason meteorology often does not receive the respect it deserves is because when we do our jobs well nothing happens. You don’t notice the planes that don’t crash, the trains that are not blown over, and, outside of the immediate area where a tornado occurs, it doesn’t make news unless there are fatalities.

By contrast, you are certainly aware if a heart surgeon saves your life or the air bags deploy in a collision. So, medicine and engineering are (correctly) perceived to have high value. To many, meteorology doesn’t have that value proposition.
When the election is sorted out, may I recommend you send an email to your elected representatives when an excellent forecast is made by the National Weather Service? Send an email, also, to your local television meteorologist or, say, AccuWeather (to use one example) when an app alerts you to a dangerous storm.
Most of all, the constant scapegoating of weather science (e.g., it is often assumed by journalists “there was no warning” whenever a major storm strikes — even if a timely, accurate warning was in effect) needs to stop.
The technology currently exists to take storm warnings to the next level and to further improve day-to-day weather forecasts but it is difficult to get Washington to appropriate the money. So, if accurate storm warnings and weather forecasts are valuable to you, please let the new congress know as well Mr. Trump or Mr. Biden.

February? Out for a run and only wearing a thin running shirt and some tracksuit shorts and I’m still warm

the polar solution – Watts Up With That?

Reposted from Climate Etc.Posted on February 26, 2021 by curryja | by Alan LonghurstNatural climate variability in the polar regions.If our planet had been designed with comparative high-latitude studies in...
Read more

Here’s what you need to know:Doses of Johnson & Johnson’s vaccine in a refrigerator at a hospital in Klerksdorp, South Africa.Credit...Phill Magakoe/Agence France-Presse —...
Read more
MY BIP