Joe Biden to remain tough on trade while re-embracing partners

TipRanksGoldman Sachs: These 3 Stocks Could Spike Over 40%Expectations of good news on the near horizon are buoying markets right now. Over the past...
Read more
Lifestyle

How To Excel When You Work From Home

Though most folks may assume having the prospect to get the job done from house is the desire. The fact is it normally takes...
Read more

During the presidential election campaign, one of the candidates pledged to put American workers first, procure American goods to fulfil government orders, and take a tough stance on China’s trade practices.

It was Joe Biden, not Donald Trump.

While the candidates disagreed on just about everything else, trade was the one area where Mr Biden borrowed his Republican rival’s rhetoric, promising a “Buy American” approach with echoes of the “America first” agenda that powered Mr Trump to victory in 2016.

Mr Biden’s stance during the campaign suggests the Democrat is unlikely to embark on a wholesale reversal of the Trump administration’s protectionist trade policies or its shift away from globalism.

But while trade deals are unlikely to be a top priority for Mr Biden, who has said he would put domestic political concerns first, the president-elect has signalled that he wants the US to start participating in multilateral organisations again — including the World Trade Organization.

Democratic and Republican administrations alike have been unhappy with the WTO’s appellate body — the influential panel that rules on disputes between its members — viewing its rulings not only as an infringement on sovereignty but also as failing to deal with China’s trade practices.

However, the Biden administration’s management of the US diplomatic relationship with Europe and the Geneva-based WTO is expected to differ significantly from Mr Trump’s approach.

Politically, it’s going to be very difficult for the Biden administration to just come in and get rid of the tariffs [on China] — there’s bipartisan hostility toward [Beijing]

The Trump administration essentially walked away from engaging with WTO members, by refusing to appoint new appellate body judges and unilaterally blocking the appointment of a new director-general. But a top priority for the Biden administration will be to re-engage with the Geneva-based body and to discuss a reform agenda.

“There is a lot of rebuilding and reform that needs to happen,” said Stephanie Murphy, a Florida Democrat who sits on the House of Representatives ways and means committee, which oversees trade. “This administration allowed for, basically, the destruction of the WTO.”

A Biden administration must also decide what to do about US tariffs on steel and aluminium imports from allied countries, which Washington has argued are in place for reasons of national security.

Mr Trump earned the moniker “tariff man” during his time in office because of his habit of slapping punitive levies on imports to the US. Undoing some of those tariffs will not be straightforward.

While the incoming president can “legally” remove those tariffs, says Chad Bown, fellow at the Peterson Institute for International Economics and former economic adviser to Barack Obama, he may face political pressure to leave them on — not least from congressional Democrats representing industrial states that swung to Mr Biden in the presidential election.

European diplomats, too, expect the tariffs to stay. “I think Biden is in a quite comfortable position in a way, in that he can blame President Trump for having introduced these tariffs and he will not face too much pressure domestically to remove [them],” one diplomat said.

However, leaving them in place in their current form is likely to cause a dispute at the WTO, where several countries have challenged the legality of the tariffs. Mr Biden could find a way around this by using WTO mechanisms to negotiate tariff levels with allies.

He could also negotiate agreements similar to that struck as part of US-Mexico-Canada, or USMCA, trade deal, under which tariffs on steel and aluminium are lifted as long as the imports from that country remain at a set low level. It would also be an option to use the tariffs to negotiate more collaboration on pressuring China, trade experts say. 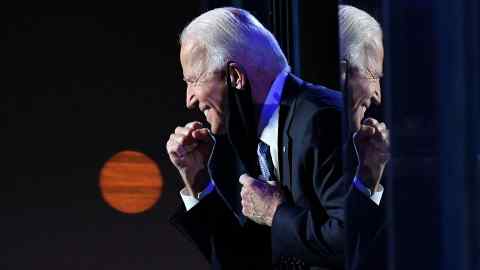 Ritchie Neal, the Democratic chairman of the House ways and means committee, said he anticipated “a more strategic, coherent approach to defend against unfair Chinese trade practices than we’ve seen from the Trump administration”.

Tariffs on China are likely to stay in place, however. “Politically, it’s going to be very difficult for the Biden administration to just come in and get rid of the tariffs — there’s bipartisan hostility toward China,” Mr Bown said.

Mr Biden will also face pressure to reduce America’s reliance on imports from China. Coronavirus has prompted concern from top Democrats, including Elizabeth Warren, the senator from Massachusetts, who have been critical of the fact that supply chains for key industries such as medical supplies and pharmaceuticals are heavily reliant on China.

On Capitol Hill, too, there is likely to be a shift as Democratic lawmakers will be empowered to push to secure workers’ rights provisions and environmental reforms in America’s continuing trade negotiations with the UK and Kenya.

Mr Neal said US trade policy would continue to be “pro-worker”, and that the enforcement of the labour and environmental protections in the USMCA agreement would be a priority.

It is also likely to focus on what it can achieve for ordinary Americans, rather than just for US companies. Miriam Sapiro, a senior trade official in the Obama administration and managing director at Sard Verbinnen, a communications firm, said it should be noted that Mr Biden has pledged to look at trade “through the lens of what can work better for America’s middle class”.

Trade Secrets is the FT’s must-read daily briefing on the changing face of international trade and globalisation.

Sign up here to understand which countries, companies and technologies are shaping the new global economy.

TipRanksGoldman Sachs: These 3 Stocks Could Spike Over 40%Expectations of good news on the near horizon are buoying markets right now. Over the past...
Read more
Business

Unity call at CWC meet to mourn Ahmed Patel, Tarun Gogoi but no resolution for Pranab

NEW DELHI: Many Congress Working Committee members made emotional appeals to “join hands to protect the unity of the Congress” at a CWC meeting...
Read more
Business

TipRanksGoldman Sachs: These 3 Stocks Could Spike Over 40%Expectations of good news on the near horizon are buoying markets right now. Over the past...
Read more
Lifestyle

How To Excel When You Work From Home

Though most folks may assume having the prospect to get the job done from house is the desire. The fact is it normally takes...
Read more
Technology

Algorithms: Community sector urged to be open up about function in choice-earning

Officers will have to realize restrictions of laptop or computer models and pitfalls of bias, authorities advisory body claims.
Read more
MY BIP