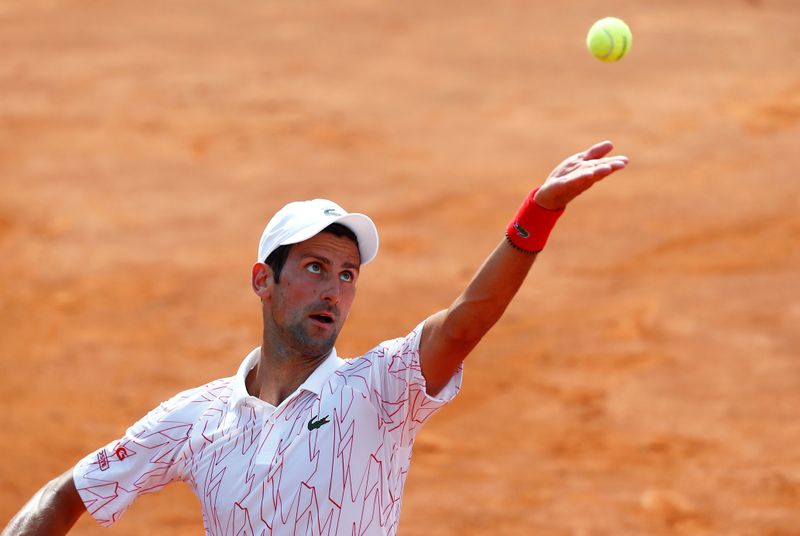 (Reuters) – Novak Djokovic overcame a mid-match wobble against Dominik Koepfer before securing a 6-3 4-6 6-3 win over the unseeded German and a semi-final spot at the Italian Open on Saturday.

The top-ranked Serb had breezed through the previous two rounds, his first matches since being defaulted at the U.S. Open for hitting a line judge with a ball, but faced a potentially tricky test when Koepfer levelled the contest at one set apiece.

However, Djokovic regained his focus to close out the victory and stay on course for his 36th ATP Masters 1000 crown.

He takes on Casper Ruud for a place in the final after the Norwegian battled past fourth seed and local hope Matteo Berrettini 4-6 6-3 7-6(5) in their last-eight clash.

“Clay is definitely Casper’s preferred surface. This is where he feels most comfortable. It’s semi-finals and it’s anybody’s game,” said Djokovic, who will be targeting his 30th victory from 31 matches this year.

“I’ll do some homework and be ready for that one.”

Rafa Nadal will resume preparing for his French Open defence when he faces Argentine Diego Schwartzman later on Saturday, with the winner meeting Canadian Denis Shapovalov, who beat Grigor Dimitrov 6-2 3-6 6-2 for his 100th tour-level match win.

In the women’s draw, 2018 French Open champion Simona Halep advanced to the semis when her opponent Yulia Putintseva retired due to a lower back injury while trailing 6-2 2-0.

Halep said: “Every time I played well against her (Muguruza), I was as much as possible aggressive.

“If I play my best game, and if I feel great physically on court, I have a big chance to win the match. But every time is different, because she’s playing so hard. You don’t really know what to expect. It’s tough.”

Twice Rome champion and fourth seed Elina Svitolina of Ukraine, who skipped the U.S. Open to prepare for the claycourt swing, was stunned by Czech Marketa Vondrousova 6-3 6-0.

This week we learned, via the New York Times, that President Donald Trump has invested in a handful of small Chinese companies, has an...
Read more
Business

Traders worry vaccine complacency is the new risk to the market

Is a vaccine the real risk to the market? Stocks are within 1% to 2% of their historic highs because of the belief that: 1)...
Read more

Be part of Our Discord Server!Welcome to r/sportsWe made a Discord server for our community and would like to invite all of you to...
Read more
MY BIP

Procuring WITH A SCIENTISTGerda Endemann, our senior director of science and research, has a BS in nourishment from UC Berkeley, a PhD in dietary biochemistry...
Read more