A City in Fear Can Be Restored

LEGOLEGO has formally introduced its partnership with Adidas Originals now for their collaborative redesign of the Adidas Originals ZX 8000 sneaker. The enjoyable, retro...
Read more
Entertainment

Although his previous wife is having yet another divorce, Tarek El Moussa is in fact flourishing in his new relationship. The Flip or Flop...
Read more
Politics

erangadothttps://mybip.com
Take a walk around downtown Seattle.  You will be shocked by an abandoned, dystopian city and made angry by the inaction and ineptness of its political leadership.   It is simply beyond words. 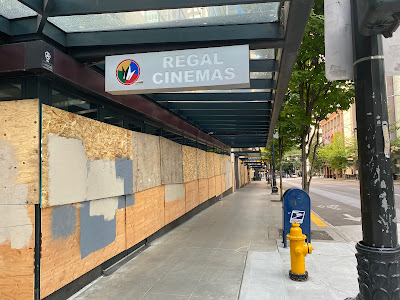 Sunday morning I took a two-hour walk across downtown Seattle and I was stunned by what I saw.
Block after block of boarded up stores, restaurants, and other buildings.  A city in lockdown and afraid.

Many stores and businesses were covered in plywood.  Some had impressive, three-dimensional triangular structures that I suppose offers more protection.  Really looked like the ramparts of some medieval castle.  Security guards were everywhere (see below). 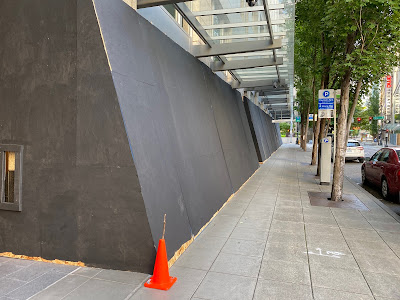 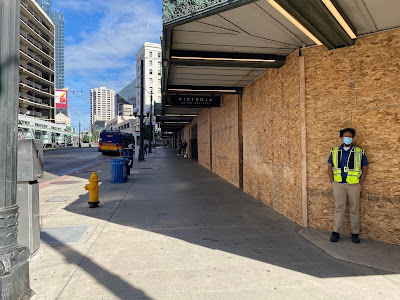 The normal tourists and sightseers were gone, with occasional dog walkers and lots of homeless people, several of them sleeping right on the sidewalk with others raving to the sky about some unintelligible offense. 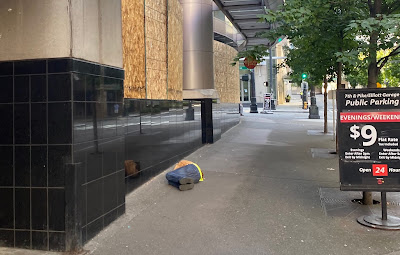 This individual was either passed out or deceased

Major stores and restaurants, including Nordstroms, the Gap, Old Navy, the Cheesecake Factory and Westlake Center were boarded up (plus hundreds more). 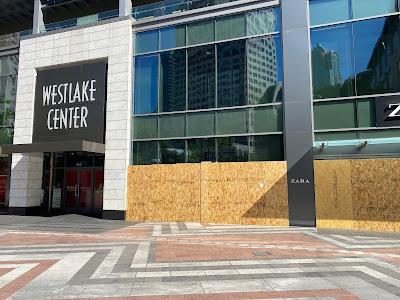 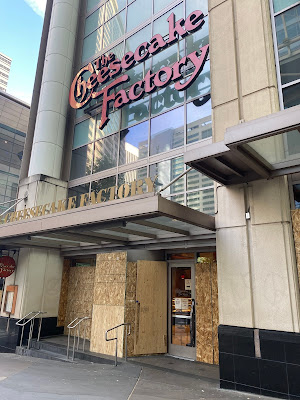 I swung by the infamous McDonalds on Third Ave– infamous for both drug dealing and violence, and I could not believe what I saw:  an obvious drug deal going down right in front of me.   How did I know?  The dealer stayed on the corner.  Someone came over to him, handed over some cash, and the dealer gave him a small envelope of something.  The customer stashed it in his backpack and quickly left the scene. 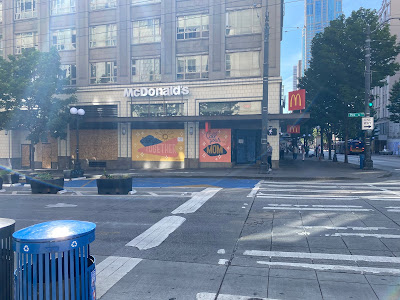 What didn’t I see on my two-hour walk?  Not a single police officer.  Not one police car.

A boarded up central core of a major U.S. city was being left to the homeless, drug dealers, and security guards.  Even the most notorious, crime-ridden corner of the city had no police.  The streets of the city had become a fearful abandoned place.

The high point of my trip was stopping at the Pike Street market, which although down was not yet out.  Some folks lined up to buy food and about half of the stalls were operating.    The Market has often been called the heart of Seattle and I was relieved to see it was still beating….faintly. 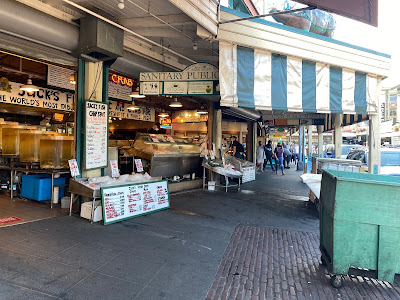 And then there were all the new buildings, many impressive and beautiful, including the Amazon campus.  Major parts of the city have been transformed in a positive way.  But now they are devoid of life and people, with fear of crime and riot redoubling the problems derived from COVID-19. 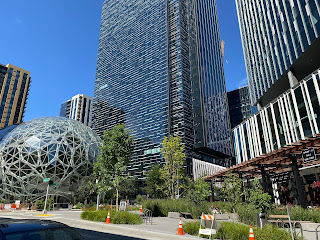 Seattle has experienced a summer of fear and failure, with criminal activities reminiscent of Nazi Germany during the 1930s.  During that time, thugs and anarchists broke the windows of Jewish businesses throughout Germany,  painted offense statements on walls, and threatened those that opposed them.  Now Seattle has had it Kristallnacht  and the photos of what occurred during the past weeks are eerily similar to those of 80 years ago (see below). 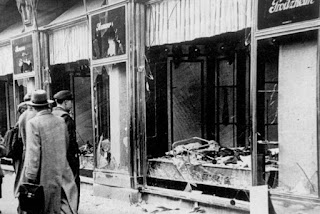 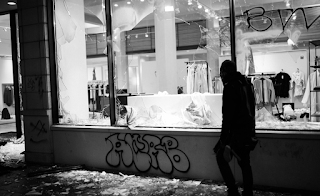 Seattle’s brownshirts have hidden within protest groups, attempting to destroy businesses both to deliver a political message of fear and to loot their contents.   Dozens of police have been seriously injured by bottles and fireworks, or partially blinded by lasers. Even in my neighborhood, graffiti calling for the killing of police have been sprayed at a prominent location.  These are not protests complaining about official wrong doing.  This is wanton destruction, and no city can remain healthy if such anti-social activities are allowed to continue unchecked.
These “progressive” merchants of fear have not stopped at destroying Seattle’s urban core, but have tried to intimate our city’s political and civil leadership by taking rancorous protests to their homes, bringing fear to family and neighbors.  Truly, the descendants of the fascists of Italy and Germany in the 1930s.

So how could a major world-class city, home to some of the most important businesses and academic institutions on the planet, allow itself to be crippled and demeaned this way?   To willingly undermine the foundations of physical safety and rule of law that is the basic prerequisite of any functioning society? 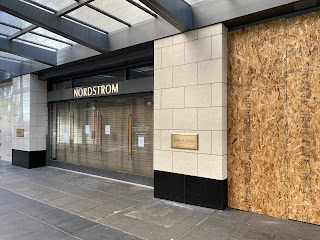 It did not have to happen.  It shouldn’t have happened.  It is the result of ineffective, weak or destructive city leadership, particularly by the Seattle City Council. And they are now taking active steps to make it even worse.

The tragic death of  George Floyd occurred in Minneapolis, not Seattle.  The Seattle Police Department (SPD) is considered one of the most enlightened and progressive in the nation, with excellent leadership. There is no logical reason for defunding, nor any plan for effectively using the funds released by cutting SPD.

Seattle citizens had every right to express strong views in public about their concerns for our nation’s black citizens.  But many of the marches and gatherings turned violent and destructive, breaking windows, burning cars, looting stores, and deliberately harming police who tried to restore safety and order.  Seattle police attempted to restrain the destruction using non-lethal tools (such as tear gas and pepper spray).  Undoubtedly, some peaceful protestors were caught in the maelstrom, but that is not the fault of the police, but of the violent actors (who were often tolerated and protected by the misguided city council). 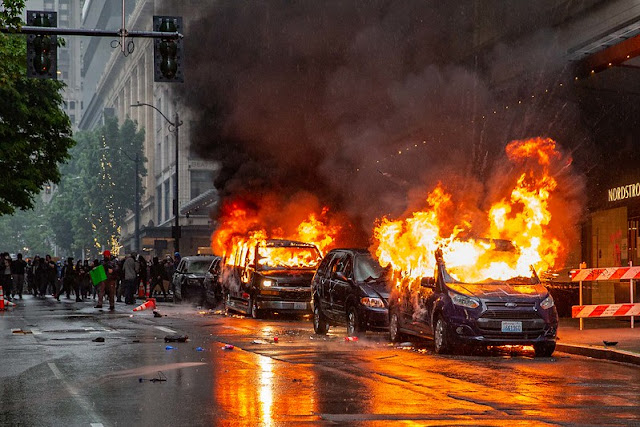 Local political leaders such as the City Council and Mayor chose to downplay the violence, while the Governor acted like he didn’t know it was even occurring.   The City Council attempted to handcuff the police by removing non-lethal crowd control tools.   And even worse, a majority of the city council called for defunding the Seattle police by 50%.  Our representatives provided emotional support to those participating in violence and intimidation.

Any rational analysis suggests that Seattle needs MORE police, not less.  Police numbers have not kept pace with the increasing population, 911 call times have substantially lengthened, crime hot spots (like McDonalds and the U District) are not sufficiently patrolled, and my stroll downtown clearly shows a city unprotected by a minimal police presence.  Violent crime is up in the city and our property crime rate is among the highest of major U.S. cities.

Some argue that new organizations could take over some of the load put on SPD.  Fine, but first prove that such capabilities can be created and are effective before reducing the protective umbrella of the SPD.  To do otherwise (as suggested by Councilwoman Sawant) is reckless and irresponsible.

Others argue that the illicit acts of a few (in fact, very few) police indict all police, and thus massive defunding is appropriate.  Not only is such an argument nonsensical, but strangely one not followed by the protestors themselves, who loudly trumpet that a few bad apples among the protesters (the ones destroying businesses, looting, burning cars, and injuring police) do not represent the “peaceful” protestors.  There is word for this: hypocrisy. 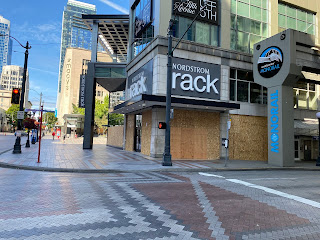 Ironically, defunding the Seattle Police Department would most seriously threaten the neighborhoods with the greatest crime, where many of the minority and low-income communities of the city live.   But many “progressive” activists and City Council members do not care; for them their political agenda or virtue signaling is more important.  Several want to push money to undefined “community groups”, an approach reminiscent of the totally failing city initiative to deal with homelessness.

It is time to restore rationality and safety to Seattle.   The motions to defund the SPD should be tabled, and a broadly representative “blue ribbon” panel of community representatives, businesses, and political leaders should analyze the situation and come up with concrete suggestions for improving the safety and well being of our city.  Reimagining is fine, but it must be done carefully and in steps.

All political leaders in the city should clearly reject violence and destruction and fully support the SPD in immediately suppressing all riots and violence.  The Governor should volunteer to immediately deploy the National Guard if needed.

With these assurances, the boarded windows of businesses can be taken down, and enhanced safety patrols of downtown Seattle and other sensitive areas initiated. 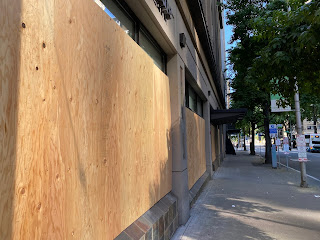 A major problem for Seattle is the open sore of homelessness, where we allow many mentally ill and drug-addicted individuals to live in filth in city streets, parks, and lots.  Police do spend a lot of time dealing with these individuals, so let’s find a better approach–what we are doing now is expensive , ineffective, and inhumane (I have ideas, but that will be in another blog).

Seattle is at crossroads.

We can continue the current path of discord and attack, and see a great American city face an inevitable, unnecessary decline.  Or we can follow a different path, putting political and personal agendas aside, listening to other points of view, ending all violence and intimidation, and restoring a civil, rational discourse. We can guide our actions with facts and information, not political talking points.

If you agree to this approach, please contact the City Council and the Mayor, with a request to stop all defunding actions and to try a more cooperative, rational approach.  Contact information is below:

A Tale of Two Renewable Energy Blackouts: California vs Texas

This post is weather-related. While the nature of the appointment is political, the position will have a direct impact on weather and climate...
Read more
Weather

LEGOLEGO has formally introduced its partnership with Adidas Originals now for their collaborative redesign of the Adidas Originals ZX 8000 sneaker. The enjoyable, retro...
Read more
Entertainment

Although his previous wife is having yet another divorce, Tarek El Moussa is in fact flourishing in his new relationship. The Flip or Flop...
Read more
Politics